How to Add Lean Body Mass with HyperGH 14X 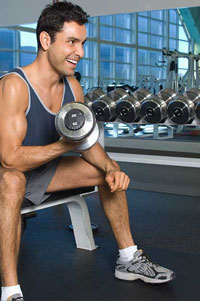 So you want to add lean muscle in time for beach season. It sounds like a plan! There’s just one problem – there’s no such thing.

I’m guessing what you mean is you want to add lots of muscle and no fat. Welcome to the same goal as every hot-blooded dude on the planet who wants to get ripped and get…lucky. But he’s going to have a hard time doing that because muscle does not contain fat.

Here’s the short version of why you’re confused – and a more accurate way to describe what you’re looking to do with HyperGH 14X:

Lean Muscle – Don’t use this term. By definition, muscle has no fat, and it’s a confusing mix of ‘Lean Body Mass’ and ‘Skeletal Body Mass’

When you increase your lean body mass, you add weight that is not fat.

But wait, you say. You just want to build muscle! Well here’s the scoop on that: you can build muscle (and HyperGH 14X is great for that for reasons I’ll explain later), but it’s notoriously difficult to put a number to your muscle growth. That’s because it’s very hard to measure the difference between water and muscle in your body.

The fact that muscle is made primarily of water just compounds the issue.

How does that sound?

How to Build Muscle

With that out of the way, and because there’s no reason to make things stupidly complicated, let me clarify now that you can obviously build muscle. HyperGH 14X is perfect for that. It may be a little difficult to put a number on it, but there’s an easier way to see that it’s working: take off your shirt. Now weigh yourself. Are you gaining weight? Do you have a belly?

To further verify your muscle building success, head to the beach, again shirtless. If you’re getting lusty glances from women, and guys sizing you up, you’re on the right track.

Maximize Your Muscle-Building – Protein is the building block of muscle. It’s called protein synthesis – the more protein your body stores, the more muscle you can build. Speak to a dietician, but you may want to go a little heavier with protein on your plate. Embrace Your Carnivore – We’re fed plenty about the evils of meat. Much of it is valid, but it’s also an excellent source of lean body mass-building protein. A study in the Journal of Applied Physiology suggests you should aim for about a gram of protein per pound of body weight. The rest of your daily calories should be split evenly between carbohydrates and fats.

Eat More – Lean Body Mass needs calories. Here’s where you’ll want to speak with a dietician about your fitness goals.

Hit Your Core Muscles – When you’re starting out – or getting back into it – pretty much any resistance -based workout will stimulate protein synthesis. But if you’ve been doing it a while, you’ll put on more muscle, faster, with your biggest muscle groups. That’s your chest, back and legs. Think two to three sets of eight to 12 reps on squats, deadlifts, pull ups, bench press and military press. Rest about a minute between sets.

Try Some Liquid Food – A study at the University of Texas found that guys who drank a shake of amino acids and carbohydrates before the gym had more protein synthesis than lifters who drank the shake after working out. The shake had about 6 grams of amino acids and 35 grams of carbs. Make one at home and you’ll need about one scoop of whey-powder protein. Drink it 30-60 minutes before you hit the weights.

Lift Every Other Day – Evidence suggests that a hard workout boosts protein synthesis up to 48 hours after the activity. You muscles grow while you rest, not while you’re working out. Meaning? Work out one day, take the next off.

Eat Carbs After Your Workout – Research also suggests you’ll build more lean body mass if you eat carbs after your workout, because they boost insulin levels, which breaks down proteins. Try a banana, a sports drink or a peanut butter sandwich after you’ve gone hard in the gym.

Eat Every 3 Hours – If you don’t eat often enough, you may limit the amount of protein your body makes. Take the amount of daily calories you need (from your dietician) and divide that by six. That’s what you should take in at each meal – and about 20 grams of it should be protein.

Have (One!) Ice Cream Snack – Here’s something you likely didn’t expect. But it’s true, ice cream appears to trigger insulin better than other foods. That helps post-workout protein breakdown and, ideally, the lean body mass you want.

Drink Milk Before Bed – Combine a light snack of protein and carbs before turning in for the night. The calories are more likely to stay with you while you sleep and reduce protein breakdown in your muscle. Try a cup of raisin bran and a cup of skim milk, or a cup of cottage cheese with a small bowl of fruit. Have the same snack as soon as you get up.

HyperGH 14X14X is a natural HGH supplement. It’s made with amino acids, botanicals, herbals and nutrients that tell your body to make more Human Growth Hormone. As well, it comes with an oral spray with Alpha-GPC, which basically acts as a turbo-charger for maximum results.

From a lean body mass standpoint, HyperGH 14X helps with exercise-induced growth hormone response – EIGR. HyperGH 14X is designed to boost the EIGR you get from your workout, and help your body recover from your time in the gym.

Put another way, it’s another tool in your lean body mass kit, and one you’ll want to combine with the tips in this article for a ripped body that tells the world you’re large and in charge.

You are invited to try HyperGH 14x™ with no RISKS absolutely FREE for 60 days! 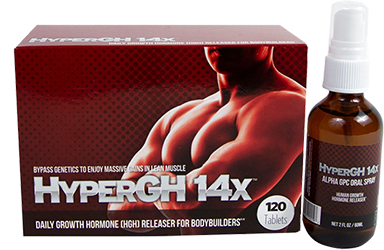